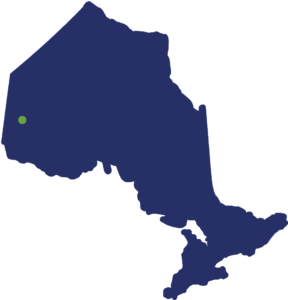 The Mount Jamie North Property was acquired for its proximity to the Mount Jamie Mine shaft, which is located 300 metres away along strike.

Very little modern exploration has occurred within the property, since much of it became patented land in the original Red Lake staking rush in the 1920’s. This is likely due to the fact that no further exploration was required to maintain the mineral rights on patented land except to pay taxes. There are a few overgrown trenches likely from that era. The present property was staked when the patents were canceled in 2013 due to non-payment of taxes. No drilling has taken place since then and there are no records of any previous drilling although there could have been some in the 1920’s or 1930’s. The Property is thus well positioned to benefit from modern exploration as seen in fig. 1.

The area of the Property was staked during the great staking rush of Red Lake in the 1920’s, as was the entire district. Horwood’s map from 1940 shows that the present Mt. Jamie North property was occupied by patented claims as part of WS Hall’s property.  Riley’s 1971 map (M2406) of the Geology of Todd Township shows historic trenches on the peninsula that were likely from the 1920’s or 1930’s and are now infilled with soil, moss and trees. These were relocated by Bounty and were partly sampled by the Author. Much of the old trenches remain covered and are not completely sampled or evaluated (see fig. 2).

The only significant modern exploration conducted on the patented ground was in 1984 by Biron Bay Resources Ltd. They completed geophysical magnetic and EM horizontal loop surveys on the patented ground (see fig. 3). The Apex Max Min II used a coil separation of 150 m, which gives a theoretical depth penetration of 75 m from surface. Conductors F and G are interesting from a gold exploration perspective because they are short strike-length conductors and therefore are not as likely to be intraformational BIF, but possibly hydrothermal in origin. Conductor H corresponds to a swamp-filled depression that leads in to a bay of Red Lake, so it may be due to clay/bedrock interface. However, this conductor lies on-strike to the northwest of the No. 2 Shaft Zone so it cannot be entirely discounted as not having a bedrock source. The HLEM survey is considered to be of good quality and covers most of the property.

In 1988 Biron Bay Resources collared a single diamond drill hole (BB-87-10) on KRL12504.   The collar location is on the boundary of the Property and was drilled under Red Lake away from the Property. The location of the drill pad corresponds to a peninsula of an old homestead. Biron Bay’s drill-hole BB-87-10 was drilled to 1,120 feet in length. Its best assay returned 2000 ppb Au or 0.058 oz/t between 78.0 and 79.0 feet downhole.

The patented claims came open for staking in 2013 when taxes remained unpaid. Bounty Gold Corp. staked the present property in 2013. Jason and Dennis LeBlanc as owners of Bounty Gold conducted prospecting with outcrop sampling and assaying during 2014, 2015, 2016 and 2018. Anomalous results in gold in outcrop from Bounty is shown in fig. 2. 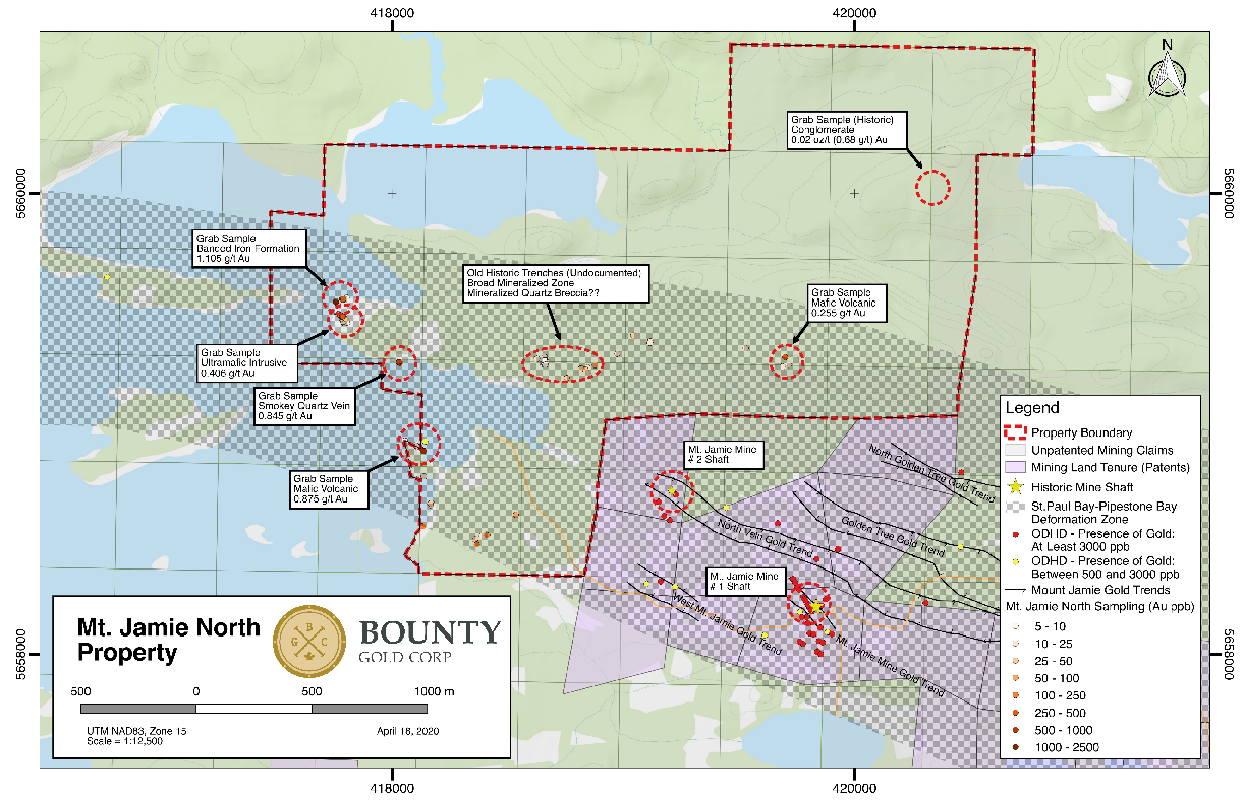 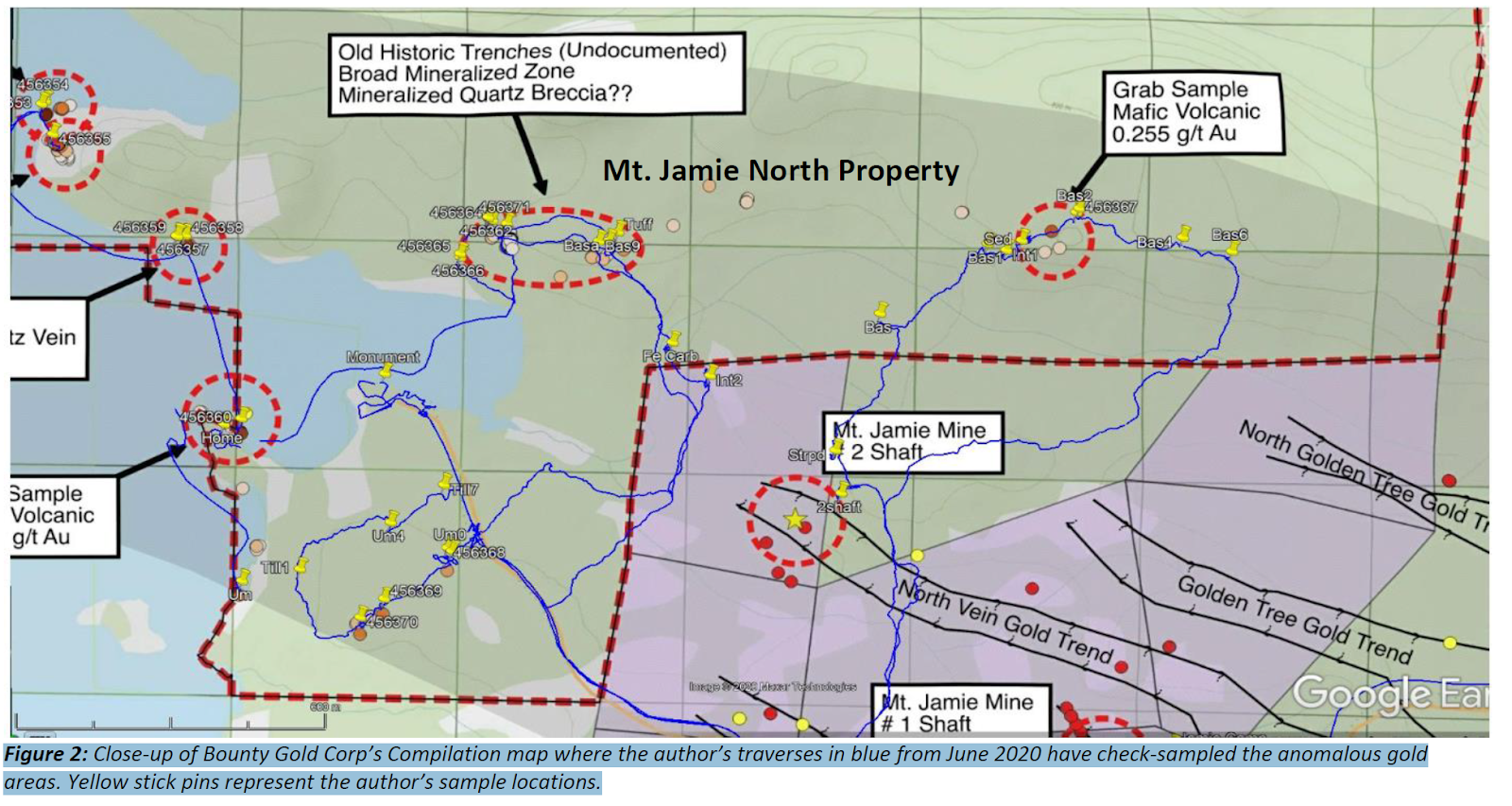 The closest historic mine workings, the Mount Jamie # 2 shaft, which was sunk to a depth of  559 feet in 1941, is about 400 meters east of the present boundary of the Property. The “North Vein” on which this shaft was sunk strikes NW toward the present claim group.   According to the Mineral Deposits Inventory file from Ministry of Northern Development and Mines of Ontario, Mount Jamie Mine consisted of two historic zones. The first is the No. 1 Vein, which was discovered in 1920. In 1928 the claims were patented and then Frontier-Red Lake Gold Mines began shaft sinking in 1936. After a pause, the shaft was deepened in 1940, but in 1942, work was halted in favour of sinking another shaft (No. 2 Shaft) on the North vein. In 1976, Mount Jamie Mines dewatered the underground workings and constructed a small gravity mill. It treated 550 tons of material that year. Then in 1980, Mount Jamie Mines Ltd, processed 420 tons remaining from stockpile of 1976. In 1983, Keeley Frontier Resources Ltd dewatered No. 1 Shaft and conducted underground and surface drilling. In 1984, Jamie Frontier Resources Inc. acquired the property and dewatered the shaft once again. In 2007, Hy Lake Gold Inc. acquired the property and changed its name to West Red Lake Gold Mines. Surface drilling has occurred since then up to and including July 2020.